In Defense of Balanced Dog Training 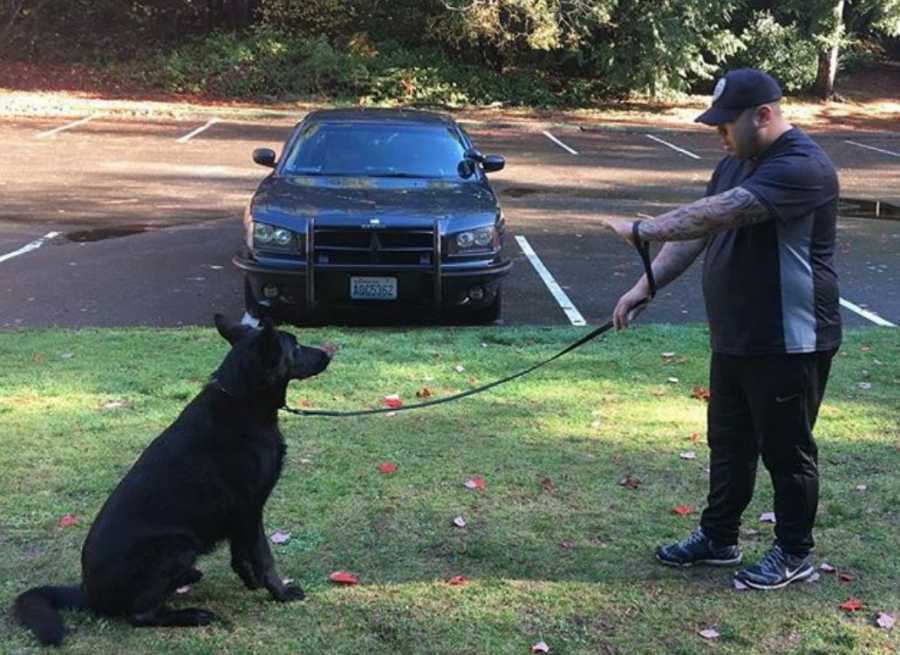 There’s a balanced training bashing article that’s been making the rounds lately. It’s just one example of a growing number of blog posts and articles put out by the purely positive movement. For the most part, these pieces are stuffed full of misinformation and misinterpretation of data, which is why I wanted to take a little time and talk about them. It’s not so much that I want to bash the purely positive training movement. (I dig that too, though. Not going to lie.) It’s more that I deal with the fallout of these training methods all day, every day. And I get pretty irritated about how manipulative these people can be.

Simply put, a balanced trainer uses both rewards and corrections to train and rehabilitate dogs. A good balanced trainer uses positive reinforcement (just like the food folks) until the point that it doesn’t work anymore. You see, balanced trainers understand the fact that there will ALWAYS come a point at which the behavior you don’t want is far more rewarding to the dog than the reward you’re offering.

For the record, Karen Pryor kind of agrees with the definition. Her website defines balanced training as “a euphemism used to describe a mix of traditional or punishment-based training and other training techniques such as clicker training.” Whoever wrote that apparently doesn’t know what a euphemism is, but more problematic is the term “punishment.” Because the fact is, balanced trainers don’t use punishments. We use corrections.

To be fair, the use of this term probably stems from the Skinnerian use of the word punishment to mean “something that decreases the likelihood of a behavior.” But the positive folks have capitalized on the negative connotations of the word.

There is a huge difference between correcting a dog and punishing a dog. A correction is a reminder, much like saying to a kid, “Hey, don’t do that,” or “Listen to me, you’re not paying attention.” Most balanced trainers use prong collars to achieve this. We’re not out there hanging dogs by the necks, yanking them around, and using the tool to intimidate and cause fear and submission. We are not hurting dogs, either physically or psychologically. We are communicating with them, the same way dogs communicate with each other. (The positive people will say there’s no scientific evidence to back this up. Just another case of the more you study, the less you know. Go to a dog park and watch dogs interact. Hello common sense.)

The problem, of course, is if the positive people actually understood the difference between punishment and correction, then all their arguments against balanced training, prong collars, and so on would come tumbling down like a pack of cards. Because they don’t create learned helplessness, reactivity, avoidance techniques and so on. Not when properly used. Sorry, positive peeps. They just don’t.

Now … can you punish a dog with a prong collar? Absolutely. You can use any tool to punish a dog. And let’s be clear: there are forced-based trainers out there who do physically and/or psychologically browbeat dogs into submission. Christina ran into one the other day, a trainer who had an e-collar on a three-month old Golden Retriever puppy. E-collars can be fantastic tools depending on the dog and training goals—but under no circumstance should an e-collar be used on a puppy.

Balanced trainers are not fanatics.

The overarching message that these people want you to take away from their balanced bashing articles is that balanced training isn’t actually balanced. It’s a pretty stupid assertion when you look at the fact that balanced trainers come in all flavors. For instance, there are many who do use clickers and food. It’s not my preferred approach, but if they have good results, I say go for it. What we have in common is:

1) We understand that at some point, every dog will need a correction.

2) We don’t deliver a correction unless we are 100% sure that the dog knows what we are asking (contrary to what this piece of work says).

3) We consider all the many tools and approaches out there depending on our experiences, the dog in question, and training goals. That is to say, we’re not wedded to a single ideology at the expense of the dog and most of us have spent years, if not decades, refining our approaches.

4) We don’t observe another trainer training a dog and make assumptions about the physiological or psychological state of that dog because we understand that not every dog is the same. (A perfect example is the positive trainers who come up to me and say that the dog I’m training has a tail that’s down, and therefore the dog is in distress. Sometimes, tails are just down.)

If all this isn’t balanced, I don’t know what is. Both the purely positive people and the force-based people are extreme ends of the spectrum who absolutely refuse to consider any view but their own. Yeah, I’d call that fanaticism.

I am also really tired of the misrepresentation of information put forth by the positive movement. The positive people are unable to distinguish between a properly-executed collar correction and whacking a dog over the head with a 2×4. This leads to paragraphs like this:

Types of punishment dogs are often subjected to are: hitting and kicking, shouting, alpha rolls (where the dog is forced to the ground and held on his back by a person), stare downs, use of punishing equipment such as choke, prong, electric, citronella and pinch collars and use of electric containment fences. Studies show that these methods increase the likelihood of aggressive and anxious behavior in dogs.

Do you see the problem with this? Or rather, do you see the remarkable fear-mongering genius? Because you will not be able to find a single study that shows a prong collar increases the likelihood of aggressive and anxious dogs. What you WILL be able to find, however, are studies that lump all these things together, and are then presented as fact against prongs or e-collars, or anything that isn’t a clicker or head harness or halter. This is not a balanced presentation of fact. It’s propaganda. We won’t even get into the fact that many of these studies start out with a clear bias.

Speaking of studies, the one cited in the article I linked to in the first paragraph (about e-collars) is pretty much inconclusive if you take the time to read past the abstract. Here’s the link straight to the study. The biggest issue is that the sample size is too small, but there are a whole host of other issues too. The devil really is in the details on this one. What problems do you see?

The average dog owner isn’t delving deep into these studies though, and that’s what makes it even worse. Why wouldn’t you take them at face value? Then it gets even more confusing by dog training that’s misrepresented.

Head halters come to mind. Here’s another example. I don’t like to speak ill of the deceased, but I can’t really get over the fact that Sophia Yin is presenting this as “purely positive.” Maybe the food makes it positive? Which is funny, because she doesn’t really need it.

So what do you notice about this video? There were two things that struck me. The first is that this is not the first time she’s worked with him. I can guarantee you that their interaction looked a lot different that first time, and if the anti-Caesar folks got ahold of it, they’d be screaming bloody murder. I find it telling that she didn’t present that first session. It’s even more telling that the page this appears on, she juxtaposes this video with one of Caesar Millan who does record the first session.

But here’s the big thing: those are some pretty sharp corrections she’s delivering! Geez, ease up lady! Given how the Gentle Leader works, she’s essentially hanging the dog up by the nose. And even when she’s just standing there and the dog hits the end of the lead, he’s getting a correction because it’s a Gentle Leader. I’m not saying there’s anything wrong with this, just … be honest, you know? Here’s to Sophia Yin, the balanced trainer!

I’ve said this before and I’ll say it again. Purely positive dog training is BIG BUSINESS. Proponents say they’re in it for the dogs, and I’m sure many honestly believe it. But the fact remains that there are people making lots and lots of money, and they have a vested interested in spreading false propaganda.

They do it by preying on peoples’ fears. How can I do the best thing for my dog? (“Scientific, modern positive-based training!”) How can I show my dog love? (“Humane training and high-reward food treats!”) Will I be a good dog parent if I use a clicker? (“Yes, and morally superior too.”)

The problem is that it only works to a certain point. With some dogs, it doesn’t work at all. There’s a reason that 70 percent of my business is fixing the problems that a certain well-known positive training facility here in Seattle has either caused or can’t resolve.

If you have any doubts, you’re welcome to see us in action. You can find us at Cowen Park most days. Please feel free to swing by. Yes, you’re going to see dogs in prong collars. And no, you’re not going to see learned helplessness, distress, pain, or suffering. You’re going to see dogs who are getting trained, and truly bonding with their owner. Honestly, that first article makes me laugh. Someone put a trademark after bond-based choice teaching? That’s what we do every single day. It’s called balanced training.