Scroll down to discover 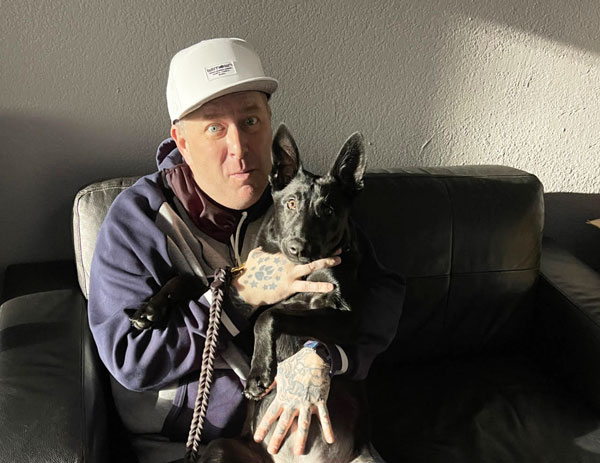 Steve Walter is the founder of Nitro K-9. His training philosophy, which is based on European dog training underpinned by the concept of yin and yang, is the result of many years of working with dogs and refining multiple techniques from many different training systems.

Steve started training dogs in his teens, using traditional military techniques. In the early 90s, when reward-based training started becoming popular, he worked with dogs using both edible rewards and clicker/marker training. However, he quickly noticed that the results were erratic, and that there was an increase in unreliable and sometimes aggressive behavior.

At the time, he was also getting involved with many of the European dog clubs, including French Ring, Schutzhund, Mondio Ring, and K.N.P.V. While food was used in training, he noticed that it was totally different in application and response. None of the dogs had aggression issues (and these were dogs that were trained to bite). They didn’t jump on people or pull on the leash. And as he trained his oldest dog Isaiah in French Ring, he started seeing a real difference; there was a new desire to please, a new confidence … and a much greater bond.

Steve wanted to bring these professional results to his clients—everyday people with household dogs. He started exploring different training systems used both in the U.S., and in Europe, working together with many different dog trainers, and has taken the best parts of multiple systems. The result is a comprehensive training program that uses non-cruel and humane methods that result in bonding, mutual respect, and stellar (not to mention reliable) behavior.

Over the years, Steve has trained thousands of dogs (and their owners) using the Nitro Dog training system. He has rehabilitated hundreds of “red zone” dogs and hundreds more that food and clicker methods have failed. Nitro K-9 training is also successfully used for advanced training, whether sports, protection or scent work—not to mention regular dogs that just need better obedience training.

Matt’s passion for working with dogs started with the adoption of his Pit Bull, Steele. In 2011, Matt and his girlfriend brought Steele to Steve to help with some serious behavioral issues. Knowing the reputation of the dog breed, Matt took his responsibility to Steele very seriously. Eight years after Steele’s initial training, Matt’s dedication to working with bully breeds has grown. Matt completed a year-long, full-time, intensive apprenticeship and is now a full-time trainer for Nitro K-9. He was promoted to a managerial position in 2018. Matt also decoys and Steve is currently training Matt to work with search dogs. In his spare time, you will find Matt and Steele camping and exploring the Pacific Northwest in his jeep.

Kristy Mae has worked closely with animals, both exotic and domestic, for her entire life. Before becoming Steve’s apprentice in 2019, she served the local community as a veterinary nurse for nearly 9.5 years. Her dogs Thorance, (a Yakima street rescue) and Bebop, the Dobbie, served alongside her at the hospital when needed. They even donated blood! Today Bebop helps Kristy Mae with training Nitro K-9 dogs in Private and Hands-Off sessions. Kristy Mae delights in seeing how the training she provides deepens the bond between a dog and their handler. She looks forward to continuing to master her skills and knowledge as a trainer under Nitro’s vision!

James joined the Infantry in 2006 and served in several combat units deployed to Iraq, Afgan and Africa. He also served in The Old Guard providing burial services to our nation’s fallen heroes.  James medically retired in 2013 due to injuries.  He got into dog training and bite sports by accident in early 2017.  He fell in love with protection sports and hasn’t looked back since. He says he lives for the bite and loves helping dogs develop into fine-tuned destruction machines.

James brings the best of both worlds to the table: he is highly analytical with a proclivity for solving complex problems and notably empathetic fostering his love for connecting and communicating with others. He has a passion for lifelong learning and teaching. James’ passion for teaching was sparked at the University of Washington, where he both studied and taught advanced physics and mathematics (often via the Socratic method). Soon after graduating, he adopted his first dog (Obi Juan) and was fortunate enough to find Nitro K-9. Soon thereafter, he became obsessed with the art of training/handling, and working with and understanding dogs. Logging thousands of hours in training with Obi, he quickly became Steve’s most ambitious client (see videos on Instagram). He’s now the proud uncle and primary handler of Baby (Steve’s Dutch Shepherd puppy), as well as Nitro’s main hands-off trainer. Needless to say, he can’t wait to get his paws on your pupper and help you develop the same type of bond with your dog that he enjoys with Obi Juan.

In his free time, he enjoys picking on his guitar, boxing/MMA, meditating, and building web applications — he’s currently studying to become a full-stack developer!

Jess loves dogs, like REALLY loves dogs. After years of working in her respective fields as a diamond expert and craft cocktail bartender, she realized that working with dogs was what she was meant to do! After finding a Nitro K9 ad in the Stranger paper and learning about their training style, she came to Steve and asked for any open position to get her foot in the door.  Fast forward to today, she uses her energetic and empathetic teaching style to train doggos with Nitro K9. She understands the learning curve and will help you work through it, because she started from the beginning just like you!

When she isn’t at her other job as a Firearms Instructor, she enjoys riding her Harley, backpacking, and a nice glass of whisky. We warn you, she makes some pretty bad puns so come to your lessons prepared to laugh, or at least pretend to!